In 1993, Peter J. Feibelman published “A PhD is Not Enough!”, a novel that emphasized how becoming an expert in one’s personal field is only part of what leads to a successful career in science.  To truly thrive in

science, according to Feibelman, one must also have a firm understanding of how to effectively utilize soft skills.  These revolutionary ideas quickly spread to academics nationwide and soon conferences and seminars inspired by the novel came to college campuses, including the University of Massachusetts (UMass).  Drawing graduate students from schools across the northeast, the conferences at UMass discussed topics such as career development, networking, and mentoring for graduate students.

It was around this time that a need for a mentoring program was identified within the Polymer Science and Engineering (PSE) Department at UMass.  In the past, first-year students were left on their own to learn about graduate life at PSE and many felt that it was difficult to connect to senior students to obtain the necessary tools to be successful. Instead, Jessica Eastman and Naomi Delong wanted to develop a program to promote a social atmosphere in the department where older students could mix freely with younger students and build friendships organically. Thus, under the guidance of Professors Alfred Crosby and Gregory Tew, Jessica and Naomi put together a funding proposal and founded the PSE Mentoring Program in 2007.

The original programming of the PSE Mentoring Program aimed to assist first-year students with the advisor selection process by asking older students to share their experiences.  The curriculum then expanded to include advice and resources relating to cumulative exams, emotional intelligence, grants, and other aspects of graduate student life. Due to the social nature of the mentoring meetings, the program has served as a bridge between the social and academic gaps of graduate school for first-year students during their transition into the PSE community.  More importantly, it has allowed incoming students build relationships with upperclassmen and foster informal mentoring. 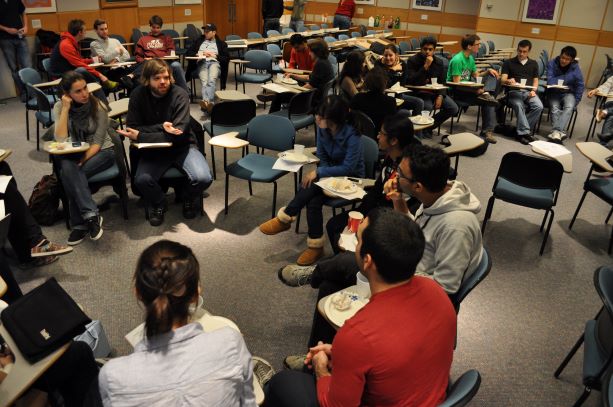 Then, in 2019, the PSE Mentoring Program identified another mentoring need within the PSE department and reorganized itself to form the First Year Mentoring Committee and the Senior Student Mentoring Committee.  Much like the First Year Mentoring Committee, the Senior Student Committee aims to provide opportunities for professional, academic, and personal development, but for upperclassmen.  This committee develops events that address the academic milestones of the prospectus, ORP, and thesis defense, in addition to leading workshops on topics such as career paths, interview skills, work-life balance, and expectation management.

The PSE Mentoring Program has been successful for over 12 years, and we look forward to many more!