See this link for other MRSEC VISUAL images. 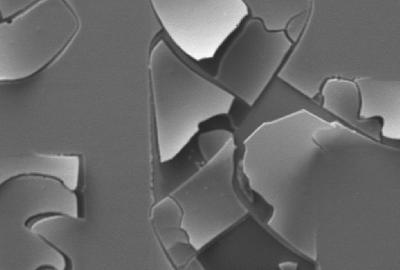 Polymer films can be molded into complex structures through a technique known as Nanoimprint lithography. Nanoimprint lithography is a new technology that shows promise for making the next generation of computer processors, as well as many other advanced electronic applications. When a molded polymer film is confined by a layer of metal oxide and heated to an extreme temperature, what may look like paint peeling away from the side of an old house is actually caused by the polymer film escaping from underneath the metal oxide layer. The result is a metal oxide film that has shattered into many pieces due to the pressure increase from the degradation of the molded polymer film. By using a scanning electron microscope (SEM), the exploded metal oxide film can be analyzed to see where the failures occurred and adjustments to the molded polymer film can be made.