“Soft materials” range from solutions and gels to suspensions, emulsions, and pastes. Projects in the Hoagland group examine the structure and dynamics of these materials, usually by application of a new or unconventional experiment. The typical aim is to understand nanoscale behaviors of individual polymeric constituents, i.e., their structure or conformation, where and how they move, or how they deform/recover when challenged with external forces. Investigations extend from polymers such as DNA to nanoparticles bound by polymeric ligands to liquid interfaces. Th observed molecular, nanoscopic, and microscopic phenomena underlie properties key to applications as diverse as ink jet printing and curing (hydration) of concrete; the same phenomena play important roles in living systems.

Current projects focus on (i) polyelectrolytes (highly charged polymers), (ii) polymers in ionic liquids (salts that melt near or below room temperature), (iii) imaging of dynamics of polymers and nanoparticles, and (iv) electrostatic assembly at liquid interfaces.  Some highlights:

Due to liquid nonvolatility, materials wetted, swollen, or dissolved in ionic liquids can be directly imaged in the high vacuum of an electron microscope, affording opportunities for in situ, real-time tracking of nanoscale structure and dynamics; such imaging is impossible for polymeric materials solvated by ordinary liquids. Individual frames from electron microscopy movies of two ionic liquid systems are given at left. The top SEM image shows a jammed monolayer of different-sized nanoparticles (colored according to size) on the surface of an ionic liquid; the mixed sizes was chosen to impede the crystallization prevalent in monolayers containing spheres of just one size. The bottom TEM image illustrates the network structure of a polyethylene oxide (PEG) gel; no other method can image solvated gel structures.

The figure at right shows a fluorescence microscopy image sequence revealing the conformations of a flexible polymer (large DNA) moving through a chromatography column (the non-fluorescent chromatography beads are not visible). Driven by solvent flow (toward upper left), the imaged molecule “entangles” around a contact between two adjacent beads, and then, through “pulley-like” chain motion, extends in the flow direction before eventual release. 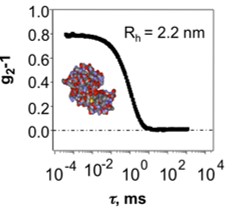 Ionic liquids have attractive properties as room temperature media for protein storage and shipping. The dynamic light scattering correlation function displayed at left was obtained for the protein lysozyme in the neat room temperature ionic liquid [EMIM][EtSO4]. The form of the decay reveals that the protein molecularly dissolves in the liquid salt, retaining a size comparable to that in aqueous buffer. Circular dichroism and infrared spectroscopy reveal the extent to which the native conformation is retained.  Understanding how protein dissolution is accomplished, which ionic liquids are effective, and how to transfer dissolved proteins into buffer are under investigation. 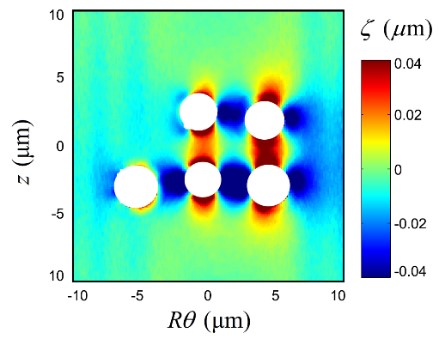 Nanoparticles and polymers trapped at an interface (liquid-gas, liquid-liquid, liquid-solid) can organize into two-dimensional structures useful as membranes and coatings.  However, the interactions that trap nanoparticles and polymers are poorly understood, as are the lateral (in plane) interactions that direct their assembly. The tradeoff between electrostatic, capillary, and ligand interactions in directing interfacial organization of particles is under investigation.  The figure at the right shows the square packing prefered by partially wetted spheres on a cylindrically curved liquid interface.

Concrete curing is responsible for 8% of global carbon dioxide emissions; adding a small concentration of polymers during curing can make the final product stronger, thereby reducing the needed amount of concrete and thus the release of carbon dioxide.  Mechanisms by which polymers interact with concrete components are unknown.  Here, the interactions of poly(ethylene glycol) (PEG), a popular concrete additive, with complex ions present during concrete hydration are studied; in particular, hydroxaluminate anions are found to induce unexpected conformational changes that may explain PEG’s effectiveness.